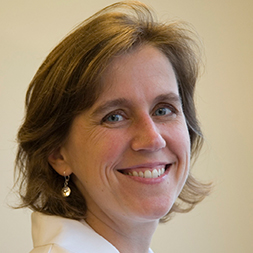 ACL tears are a serious, often career-ending injury for football players. These tears and other knee injuries are very common, and the recovery process is difficult and slow.

Martha Murray, MD, an orthopedic surgeon at Boston Children’s Hospital and professor at Harvard Medical School, has been working for several years on a new technique for ACL repair that will hopefully reduce the impact to sports performance and lower the risk of developing arthritis in the knee.

The ACL does not heal on its own, so the current treatment for an ACL tear is knee reconstruction surgery, during which the torn halves of the ACL are removed and replaced with transplanted tendon. After ACL reconstruction, most players never return to their peak performance and many end up with arthritis.

Dr. Murray’s technique is called bridge-enhanced ACL repair (BEAR), and it helps the torn ACL heal itself. She believes this will lead to better outcomes, because it allows the knee joint to keep its original parts and function normally.

BEAR works by using a sponge filled with the patient’s blood to connect the torn halves of the ACL, constructing a “bridge” across the tear. This allows the ACL halves to grow across the bridge and reconnect, a less intensive process than reconstruction, which requires removing the ACL, harvesting a replacement tendon, and screwing it into place.

The BEAR technique could impact many players. According to early results from our study questionnaire, which was completed by more than 3,700 players, more than half of those surveyed have undergone knee surgery at some point in their careers, with twenty-one percent reporting an ACL reconstruction surgery. Thirteen percent have replaced a knee joint since retiring.

As Dr. Murray’s work progresses, there are positive findings. Early human trials of BEAR have demonstrated shorter recovery periods. A second, larger trial of BEAR is currently underway. The patients will be monitored for 10 years to get a complete picture of both the immediate recovery period and the long-term health effects. In particular, Dr. Murray will monitor whether her patients continue to have a reduced risk of arthritis.

If the results of the current study are good, then BEAR may become a widespread option for ACL repair within the next five years. As the patients from her first pilot study are doing well, Dr. Murray is optimistic that she will soon be able to offer athletes with ACL tears a safe surgical option for recovery with quicker healing times and lower risk of developing arthritis down the road.